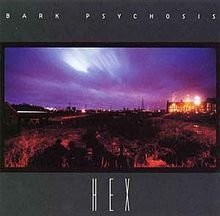 Thoughts on “Hex” by Bark Psychosis, twenty five years on

For me “Hex” is the sound of an unfamiliar town as a cold winter turns into a slightly less cold spring. Dark nights, catching buses which take odd turns into housing estates I have no idea about, feeling uneasy, paranoid – where ARE we going? I don’t recognise this street, can everyone see the panic on my face? I’d only been living in Newport for a month or so, slowly settling into my new house. I didn’t know the town, only how to catch a bus in to the bus station and a bus out to work. If anything happened differently I was lost. One day it snowed and all the buses stopped, I tried to walk to work and got completely lost and ended up having to ring in to work from a call box to admit defeat and say I wasn’t coming in. My parents brought my cat Bez to live with me and he hated it – he missed his three feline playmates in Penarth, he didn’t like being stuck inside the house all the time and spent most of his days sat on top of my wardrobe miaowing at me. He went back after a week. It wasn’t that easy for me.

And “Hex” by Bark Psychosis is that feeling put into music.

Released 25 years ago today (that’s Valentine’s Day 1994) “Hex” was a debut album which had been four years in the making, and in a way was a culmination of a trend in music, and for all the times it has been referenced since, it stands alone and outside of everything.

Bark Psychosis were formed by Graham Sutton (guitar and vocals) and John Ling (bass) in 1986 when they were both 14, and became more of a going concern with the addition of Mark Simnett on drums and Daniel Gish on keyboards. They started gigging in 1988, playing live sets characterised by noise and aggression, hence the band name. After an initial appearance on a flexidisc free with Clawhammer fanzine, they signed to Cheree Records – home of The Telescopes and Whipping Boy – to issue their initial singles in 1990. Debut single “All different things” defined an early template for them – quiet tension, deep reverb, haunting minimal vocals then loud explosions of noise to release the tension. “Nothing feels” / “I know” was quieter still, all hushed whispers, heartbeat drums and atmosphere in spades. They were noticed in the music press and the likes of Simon Reynolds waxed lyrical on them in Melody Maker.

After a move to Third Stone Records, a new EP was issued in 1991 – “Manman”. This was progress… There was more emphasis on rhythm, a solid bottom of throbbing bass on the title track, a propulsive movement. But the following songs were even better. “Blood rush” is far from that, gentle waves of tremelo guitars, lightly brushed ride cymbals, Sutton’s subtle vocals, and then slowly the song rises over seven minutes, before merging into “Tooled up”, a brutal rhythm, again more tension and threat. Again more kind words from the music press…

And then there was “Scum”, an absolutely extraordinary single issued late in 1992. It felt like music was constantly striving for something greater, longer, more expansive at the time – singles like “Avenue”, “Gravity grave”, “Lazarus” and “The Blue Room” were pushing boundaries, and “Scum” was right up there with those singles. It was recorded in a church and sounded like it, so much natural reverb, so much space… nothing happened for minutes on end, just sound. Then drums in the distance, then a strummed chord of guitar, baseline throbbing and those whispered vocals again…. “don’t tell me that we’re all free”… (A response to “Everybody’s free to feel good” apparently). And it kept on building to a crescendo over minutes and minutes before floating back to silence. Over twenty whole minutes. Stunning.

That’s where I picked up on Bark Psychosis. I was intrigued by the rapturous praise from Melody Maker and bought the single and it was as good as they said. I couldn’t find any of their old records though so I just waited and waited for something new.

The first and last single from “Hex” was “A street scene”, and I bought the ten inch red vinyl from Diverse Records – one of my first purchases after moving to Newport in January 1994. It was almost a normal song, had dynamics and a tune but the slowing down coda was beautiful. And the b side “Reserve shot gunman” was more rhythm and threat with a squealling guitar solo. What would the album bring?

I bought “Hex” on the day it was issued, Valentine’s Day 1994. Not that I had a valentine that year. When lovers everywhere indulged in meals and chocolates and huge inflated prices for roses, I spent the night listening to the new Bark Psychosis album.

It’s not a conventional rock album – it was after all the album that gave rise to Simon Reynolds’ term “post-rock” – but it is mainly played out on conventional instruments. it was recorded meticulously and sequenced in places using whatever now-primitive technology was available at the time, but it all sounds natural. It doesn’t sound synthetic at all. There’s lovely tremelo guitar, bass and drums, piano sometimes in chords and patterns, sometimes just notes. The music ebbs and flows naturally, quiet to loud to quiet, the drums are brushed rather than hit hard, spaces in the music… And Graham Sutton’s whisper of a voice telling secrets and truths – “It’s gonna work out anyway”, “You turn my world upside down”, “And that’s the biggest joke of all”. Everything about the album is perfectly placed, not a note or second jarring or spoiling the late night atmosphere. And it does sound completely natural, you’d be hard pressed to hear the technology at work, the year spent working on samplers and sequencers was worth it to make it sound so much like a group of musicians playing together in a room (or a church)

Somehow it feels wrong to take the album song by song, dismantle the magic there and try to describe what happens. “Hex” is such a perfectly formed piece that I don’t want to do that. Each song is magnificent, moving along the pace deliberately and carefully. Each song means something special to me, those memories, those times. How about highlights then? The entrance of the Duke Quartet over the piano on “The Loom”, the gentle deceleration in the coda of “A street scene”. The twinkling guitars and synths which take over the second half of “Absent friend”. The night drive around town of “Big shot”. Then the closing two songs. “Eyes and smiles” flows from one section to another, that guitar pattern, cymbals keeping time, occasional bass, keyboards like a sunrise, moving across eight minutes of logic and beauty, rising to a crescendo as the musicians slowly increase the pressure, the drums swing around, the bass juts in, wild Miles Davis style trumpets blatt in, the levels increase and Sutton finally lets loose, shouting “And you’ve got to go on!”. After that – no more words. “Pendulum man” is a nine minute drift of guitars and synth washes, making the most of the echoes in the church being used to record the album. A great closer, relieving the tension building up to that point.

As I keep saying “Hex” felt like something ending and in a way it was. It was effectively the end of Bark Psychosis as a band, members were dropping out as the album was recorded, leaving only Sutton and Simnett as the members. But also it was the end of a trend in music too. Bands like Seefeel, Insides, Spoonfed Hybrid, Pram, Disco Inferno and Butterfly Child has been pushing the boundaries of music, integrating technology and sampling into their sound, and Bark Psychosis were part of this. When Simon Reynolds used the term “post-rock” when reviewing “Hex” he included all these artists in the same breath – there was a Melody Maker article on this around the same time. And somehow it felt by naming it the spirit of adventure was sullied in some way, and by 1995 post-rock was no longer what these artists had achieved but was moving towards America, towards Tortoise and La Bradford and instrumental textures. Nothing wrong with that, but the spirit of adventure in the British music was slowly dissapating. But that’s another tale. Bark Psychosis issued one more single “Blue” – a heartfelt and passionate New Order homage – before disappearing, Sutton moved on to jungle and Boymerang and a career as a producer with an incredible ear for space and sound. Bark Psychosis would return in 2004 with the album “Codename : Dustsucker”, an excellent follow up to “Hex” but it was a Sutton solo project.

But “Hex” has had an interesting afterlife. I always thought Scott Walker’s “Tilt” album had hints of Bark Psychosis in it. Certainly Slowdive were listening because “Blue skied an’ clear” on “Pygmalion” owes a lot to “Hex”. And as time has passed songs appear which are in thrall to Bark Psychosis, by bands like These New Puritans, Mogwai, Doves and Trembling Blue Stars. “Hex” became a touchstone for other artists or fans to mention in awe, alongside “DI go Pop”. A reissue and remaster two years ago was welcome. Of course now it’s seen in the lineage of experimental rock music alongside the later Talk Talk albums (whose own use of silence and noise must have had some influence on Bark Psychosis). It’s also an album which stands outside of time – nothing in the sounds datestamps the music to a particular year, no synths or drum machines to date the music. Timeless.

But let’s not forget the album itself and that moment in time – “Hex” was issued on Circa Records, a subsidiary of Virgin, and I clearly remember a lot of promotion going into it – the single discounted in shops, album displays in HMV and Virgin, posters all over Corporation Road for “Hex” (and that’s another memory I would rather forget), songs appearing on Virgin samplers – “A street scene” on “Signed sealed delivered” compilation, “Pendulum Man” on the 3rd “Ambient” collection. The label really pushed “Hex” and maybe there was a hope it could become mainstream. Who knows? A major label took a chance on such an odd record at such an odd time. Those days are long gone.

So turn off the lights, watch the night fall with the curtains open and let “Hex” weave its magical spell. Try not to get lost

This site uses Akismet to reduce spam. Learn how your comment data is processed.